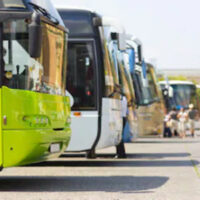 In addition to the public buses that carry commuters all over the Atlanta metropolitan area, private buses used for church groups or tours are also common sights on our roads. However, in the rare instances where a bus is involved in a road accident, their sheer size and weight can lead to some very serious injuries for anyone unfortunate enough to be affected. If you have been injured in an accident involving a bus (either in your vehicle or on the bus itself), you do have options for seeking compensation for your injuries.

While the Federal Motor Carrier Safety Administration (FMCSA) does not track bus accidents solo, the figures for fatal large truck and bus crashes show a rise of roughly 10 percent in one year. On average, the statistics for buses show that school and public transit buses made up roughly three-quarters of all the accidents involving buses, with intercity buses (Greyhound and other similar companies) responsible for about 15 percent. Bus accidents do not make up a large percentage of accidents per year, but they make up a disproportionate amount of injuries.

If you are unlucky enough to be in an accident with a bus, you are likely facing serious medical bills, regardless of how you figured in that accident (as a passenger, a pedestrian, or as the driver or a passenger in the other vehicle). Injuries can run the gamut from mere cuts and bruises, to broken bones, to traumatic brain injuries and worse, and in addition, you may be able to receive compensation for less tangible causes of action, such as lost future wages, pain and suffering, and loss of services and support. You need an experienced attorney to help improve your chances of recovery.

Once you have received the proper medical treatment for your bus crash injuries, the next question that you need to ask is whether you will be permitted to file suit at all. This may seem counterintuitive, but especially when it comes to school buses or other buses that are owned by government entities, you may not be permitted to file suit against them. This is due to a concept called sovereign immunity, which dates back to medieval England, where the sovereign was not able to be sued (the idea being that if the sovereign could be sued, they would have no time to govern).

Georgia does waive sovereign immunity in specific situations, more specifically “for the torts of” state employees who were acting “within the scope of their official duties or employment.” They will be liable in the same manner that a private individual would be liable if the court found that way. This means that if you were injured by the negligence of a state employee (say, a MARTA bus driver), you would in theory be able to file suit against MARTA for the injuries you suffered. If the bus was privately owned, or if the person whose alleged negligence caused your injuries was not a state employee, then sovereign immunity is irrelevant, but if your bus accident was with a public bus, it is a question that you then have to answer.

Being in an accident that involves a bus can be a life-changing event, with serious injuries being more likely in these accidents than in crashes involving smaller vehicles. If you have been injured in a bus crash, the Marietta bus accident lawyers at The Strickland Firm are happy to try and assist you. Contact our offices today to speak to an attorney.