Close Menu
Home > Blog > Car Accidents > Is There a Difference Between Aggressive Driving and Road Rage?

Is There a Difference Between Aggressive Driving and Road Rage? 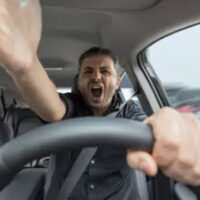 What is Aggressive Driving?

Aggressive driving, according to AAA, involves “any unsafe driving behavior, performed deliberately and with ill intention or disregard for safety.” AAA lists common forms of aggressive driving, which may include but are not limited to the following:

Aggressive driving is much more common than you might think, and you may have even engaged in one of these behaviors recently. Much too frequently, aggressive driving results in serious crashes in which aggressive drivers and others on the road suffer injuries. In a recent AAA study, the organization found that more than 50 percent of drivers, or 104 million people, admitted to purposefully tailgating another car, while 47 percent, or about 95 million drivers, said that they had actually yelled at another driver on the road. About 45 percent of drivers admit to honking at another driver simply to show annoyance at least once in the last year, and nearly a quarter of all drivers have tried to block another car from changing lanes in the last year alone.

How is Road Rage Different?

Road rage is an extreme form of aggressive driving, and it may even involve altercations with other vehicles. According to AAA, the following are common examples of road rage:

While aggressive driving is negligent and can lead to a serious car accident, many acts of road rage show a driver’s intention to cause harm. If you were injured in an aggressive driving crash or a road rage incident, it is extremely important to find out about your options for compensation.

Were you injured in a car crash caused by an aggressive driver? It is extremely important to hold that driver accountable by filing a claim. You should not have to pay the price of another motorist’s negligent behavior. An experienced Marietta car accident attorney at our firm can speak with you today about your options for seeking financial compensation after a traffic collision. Contact The Strickland Firm for more information about how we can assist you.

By The Strickland Firm | Posted on June 17, 2020
« What Steps Should I Take After a Traffic Collision?
Top Things to Know About Drowsy Driving Accidents »