Issues to Consider in a Rear-End Collision 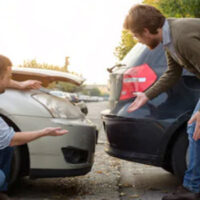 Many of us have been involved in minor rear-end car collisions or know someone who has incurred vehicle damage in a rear-end crash. These types of accidents can be complicated because many people assume that the driver who rear-ends the vehicle in front is always responsible or at fault for the crash. While the rear-ender may indeed be liable in a majority of these kinds of wrecks, it is also important to keep in mind that the driver who is rear-ended also may be liable, as may another party altogether. The following are some issues to consider when you are seeking compensation after a rear-end car accident.

A lot of rear-end collisions do occur because the rear-ending driver (the driver behind who strikes into the car in front) did not leave sufficient following room in case the car in front stopped suddenly, or was distracted and did not come to a stop as a light turned red. In most cases like this, the rear-ending driver will indeed be liable. However, if you were rear-ended by another motorist, it is essential to think ahead about how that driver may try to avoid liability. One way is to argue that you are partially at fault for the collision.

If the driver behind you was not paying attention or did not leave sufficient following room, how could you possibly bear any of the responsibility? There are a variety of scenarios in which the driver in front may also be at fault, or may be entirely at fault. For example:

If the rear-ending driver does use the theory of comparative fault to argue that you are not entitled to full compensation, you should immediately begin working with a car accident lawyer who can seek evidence to prove that you do not bear responsibility for the crash.

If you are involved in a rear-end crash, you should seek a medical assessment as soon as possible, even if you do not feel like you have been injured. As the Mayo Clinic explains, whiplash is “a neck injury due to forceful, rapid back-and-forth movement of the neck, like the cracking of a whip.” When it comes to rear-end car accidents, whiplash is an extremely common injury, and it may not produce immediate signs or symptoms. As such, if you do not see a doctor, the symptoms could appear hours or days after the collision, and by that point the injury may have worsened unnecessarily. If this happens, the at-fault driver can argue that you bear some of the responsibility for the severity of your injuries and may be able to avoid providing you with full compensation.

Were you involved in a rear-end car accident? A Marietta car accident lawyer can help. Contact The Strickland Firm to learn more.