Close Menu
Home > Blog > Personal Injury > When Is A Motorcyclist Liable For A Crash?

When Is A Motorcyclist Liable For A Crash? 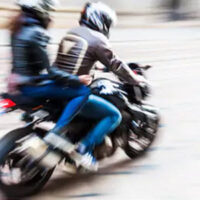 Motor vehicle accidents in Georgia can have many different causes. There are instances where issues like a defective auto part, or dangerous premises, are the primary cause of a wreck, but this is not the norm. With most collisions, driver error plays some role in causing a crash, although not all motorists involved in the accident may be at fault. When a crash involves a motorcyclist and one or more automobile drivers, how can you determine who was at fault for the accident? Answering this question about fault is critical for anyone who was injured in the collision and wants to file an accident claim for compensation.

Yet determining fault is not always so straightforward. The specific facts of your case will be essential in determining fault, and you should have a Georgia motor vehicle accident attorney evaluate your case. Until then, the following are some issues you might consider as you begin to think about whether a motorcyclist or another driver was at fault in a recent collision.

How Many Vehicles Were Involved in the Collision?

While we often think about motor vehicle crashes as involving two or more vehicles, some motorcycle accidents are single-vehicle collisions. If a recent motorcycle accident was a single-vehicle crash, it may be more likely that the motorcyclist’s own negligence played a role in causing the crash. However, you should not assume that this is the case. Other factors may have caused the collision, and another motorist in a car or truck could have engaged in behavior on the road—such as speeding or cutting off a motorcyclist—that caused the crash, even if that other motorcyclist was not involved in the collision.

Were Any of the Motorists Intoxicated at the Time of the Collision?

Alcohol consumption is a primary cause of many automobile accidents, including collisions involving motorcycles. According to the National Highway Traffic Safety Administration (NHTSA), alcohol is a factor in approximately 45 percent of single-vehicle motorcycle accidents. In crashes involving a motorcyclist and at least one other vehicle, alcohol impairment causes more than 30 percent of all motorcyclist fatalities—including alcohol consumption by the motorcyclist or the other driver, according to the Insurance Information Institute (III).

If a motorcyclist had a blood alcohol concentration (BAC) of 0.08 percent or higher, that motorcyclist could bear all or a portion of the liability for the collision.

Was Lane Splitting an Issue?

Likewise, any other unlawful behaviors like speeding or tailgating could result in a motorcyclist being responsible for the accident.

If you were involved in a crash and have questions about filing a motorcycle accident claim, you should reach out to one of our experienced Marietta personal injury attorneys as soon as possible. Contact The Strickland Firm for more information.

By The Strickland Firm | Posted on June 29, 2021
« What To Do If You Are Hit By An Uninsured Motorist
How To Make The Most Of Your Free Personal Injury Consultation »