Close Menu
Home > Blog > Car Accidents > Who Is To Blame For Rear-End Collisions In Marietta?

Who Is To Blame For Rear-End Collisions In Marietta? 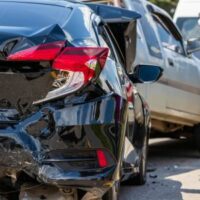 Rear-end collisions are some of the most common traffic accidents in Marietta. These crashes occur when the front of one vehicle strikes the back of a vehicle they are following. Generally speaking, after law enforcement visits the scene of the crash, an officer will find the driver that was following another is at fault for these accidents.

However, just because the following driver is the one to receive a ticket does not mean that ticket cannot be fought. In some situations, it is possible to find that the driver in the lead was at fault for the crash. Determining which driver is at fault for the accident will depend on the facts of the case, and the evidence that supports those facts.

The Laws that Apply to Rear-End Collisions in Marietta

There are two main laws that apply to rear-end collisions in Marietta. These are the following too closely law, and the failure to signal law.

The following too closely law states that drivers of motor vehicles must not follow other drivers in a way that is not prudent and reasonable. This statute also states that drivers must take into consideration the speed of the vehicle in front of them, as well as the traffic conditions of the roads or highways. Under this law, it does seem as though drivers that strike other vehicles from behind are at fault for rear-end collisions.

The failure to signal law prohibits drivers from stopping suddenly, or decreasing the speed of their vehicle, without first signaling appropriately to other drivers that they intend to do so. Under this law, it may seem as though the leading driver can be at fault for a rear-end accident. So, which driver holds the blame?

Like most legal issues, determining which driver is at fault for a rear-end collision requires a full examination of the facts. The issues recognized in the legal statutes are examples of some arguments that may be raised when there is appropriate evidence to support that fact.

For this reason, it is critical to collect as much evidence as possible after any crash. Pictures of damage to the vehicles involved, markings on the road, and the final positions of the cars involved are very important pieces of evidence. Also record your initial reactions to the accident and how you believe it unfolded. Your memories may fade over time and this documentation will be very important.

The aftermath of car accidents is always confusing, but this is particularly true in the moments following a rear-end collision. At The Strickland Firm, our Marietta car accident lawyers will review the facts of your case and collect the necessary evidence to give you the best chance of recovering the full damages you deserve. Call us today at 1-844-GAJUSTICE or contact us online to schedule a free consultation and to get the legal advice you need.

By The Strickland Firm | Posted on October 11, 2021
« Common Myths About Personal Injury Claims
What Makes Trucking Accidents In Marietta Different From Car Crashes? »